Heating up winter with an electrical fire! 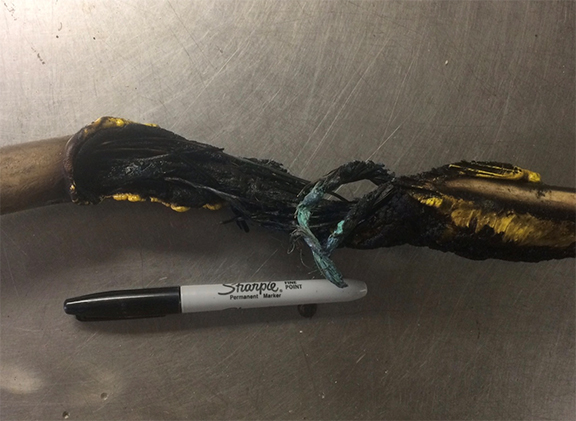 If this photo isn’t enough to scare you I wish that I had a video of the sparks and flames shooting 2 feet out of the cord.  I guess the boat owner was too busy with the fire extinguisher to film it.

A 30 amp shore power cord is the standard for small to medium size boats and it provides the vessel with up to 30 amps of 120 volt power – this is enough to power  two space heaters (1,500 watts each) with a bit left over. That’s about about 3,600 watts total.  In contrast, larger boats with 50 amp shore power have far more power available than most people think.  These systems can provide up to 12,000  watts. Yes, over 3 times the energy of the 30 amp service.  This is because you are actually getting two wires of 120 volts each that can carry 50 amps – basically a 100 amp service. This is great for making your boat a comfortable home – I love my 50 amps! But when things go wrong, they can go very wrong.

Look again at the photo, what if that fire had been in the part of the cord that was sitting on the boat deck instead of the dock?  The wooden dock did get a nice 6” diameter burn mark and was aflame when the boat owner got to it.  Now, I will admit, that a fire in the body of the cord is rare. Commonly it is the plug end of an electric cord that melts or burns, but both situations could result in considerable property loss and danger to life. T

How Does the Fire Start?

It is easy to imagine, that over the lifetime of an older cord, there could have been times when it draped into the water or was pinched between the boat and the dock. Or perhaps your cord was left plugged in when you were pulling out of the slip – don’t forget the yellow dock line!  The wire is protected from the elements by a water-resistant cover and water-resistant end fittings, but according to Marinco, the largest maker of shore cords, “materials and design are not intended for underwater use”.

When copper is exposed to seawater the outside surface corrodes to copper oxides and these oxides do not conduct electricity as well as pure copper.  Corrosion essentially reduces the size of the wire. Additionally, damage from pinching or sharply bending the cord could break individual strands of wire and reduce the effective wire size in that location.

Sadly, 50 amp cords are not overbuilt.  The standard wire size in these cords is 6 AWG (American Wire Gauge – approx. .162 inches in diameter) and that has an adequate amount of copper, when new, to transmit 50 amps. Unfortunately, the cost increase – not to mention the weight – would be huge to go up to the next wire size.  No one would buy one – except for maybe the guy with the burnt cord. 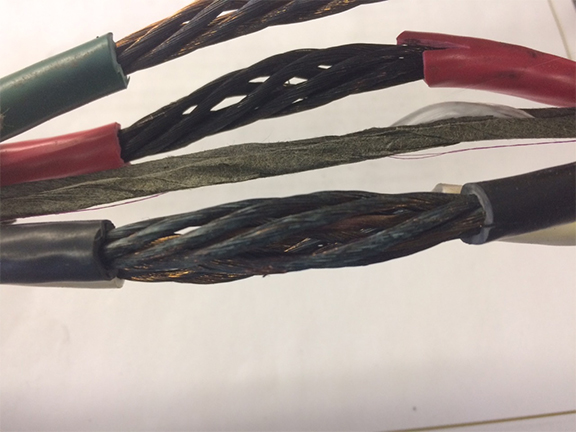 Broken strands and a layer of corrosion caused by years of abuse can cause the 6 AWG wire to perform more like a smaller wire – a wire that struggles to transmit the high energy loads placed on the 50 amp cord.  The damage causes resistance to the flow of electricity and resistance produces heat.  Remember the 12,000 watts? The 8 space heaters?  If just a small percentage of those watts were converted into resistance/heat, the wires inside their rubber sheath would heat up like dropping a rain coat over one of those space heaters.  No Bueno.

Will the Breakers Save Me? Not likely. The 50 amp breaker at the dock will shut down the power under one condition, the total amperage of one of the two positive wires exceeds 50 amps.  This will happen if there is a short circuit (positive and neutral wires touch each other) or you turn on enough appliances without somehow tripping breakers in the boat first.  The breaker on the dock doesn’t “know” if you are heating the boat or having a 3,000 watt cord fire.

What to do about it?

The easy answer is to buy a new cord before the old one catches on fire (no, KKMI is not in the business of selling cords).

Clearly, if the either plug end gets too hot and starts to melt next to the prong the end needs to be changed. When replacing the plug the cord needs to be cut back to where the copper wire is nice and shiny.  If the wire looks like the photo above, even a couple inches from the plug, then consider yourself lucky and replace the entire cord.  Whatever it was plugged into should also be changed, as there is sure to be some damage there as well.  Having a clean and tight contact between outlet and cord is the most critical element of shore power safety.

In this case the plug end looked fine and the wire was shiny just below the plug so the only indication of the danger was the obvious age of the cord.  I believe that resistance measurements could be made on an intact cord to determine the potential for a resistance-caused fire – but that will require further study or the expertise of an electrical guru. 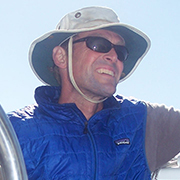