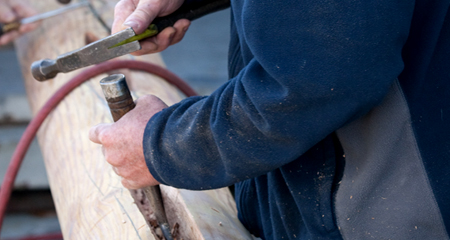 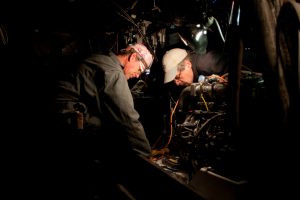 It’s all about “JOBS”…that was the big sign on the top of my hat when I spoke before the San Francisco Board of Supervisors in 2011. The occasion was Golden Gate Yacht Club’s (Team Oracle) request for approval to defend the 34th America’s Cup on the San Francisco Bay. As I’m sure you can recall, gaining this approval was hardly a slam dunk for GGYC.

As a lifelong Bay sailor the prospect of the Cup being held on the Bay is something I’ve always wished for, that however was not my reason for speaking. My purpose was to impress upon the Board of Supes the importance of maritime industry in providing more than a valuable service to the seafaring community. I informed the Supervisors how the maritime industry generates highly skilled and well compensated jobs. Additionally, they were told there’s a shortage of such skilled craftsmen and my “pitch” (and hope) was the Cup would serve to “jump start” many of these much-needed jobs, which would clearly be of benefit for all concerned.

Fast forward 5 years, and low and behold, the America’s Cup failed to serve as the source of ignition for the maritime industry as I’d hoped. Too bad. Worse yet, after proving to the world the Bay truly is the ideal venue for such an event the GGYC took their ball and decided to go play somewhere else….but I digress. 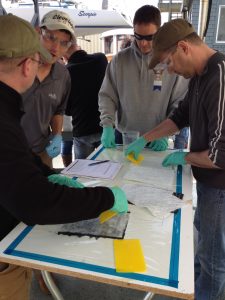 Here’s what KKMI has done…we’ve taken a multi-pronged approach and it started a long time ago. To begin with we believe that, for the most part…you get what you pay for. So, in order for KKMI to have the best craftsmen we’ve always provided highly competitive wages and superior benefits. Even as the Great Recession began and continued, we made a commitment to our Team to do all that we could to retain our skilled craftsmen. We’re proud to say…KKMI has stuck to this 100%. So while other companies lost many of their skilled craftsmen, we did our best to go the opposite direction. This decision allowed us to maintain our position as a company that provides superior value by delivering superb workmanship. While it was difficult to accomplish, the retention of our core team also enabled us to reinvest in our business for the future. Whether it was through continued training, advanced equipment or improved compliance….we knew that such investments were our future.

KKMI is fortunate to have been able to retain our level of craftsmanship, but because we haven’t started ushering in the next generation of skilled workers, we are all going to witness some long term effects. As far as you’re concerned, you’ll see this manifest itself in longer wait times to get jobs done.

So what’s the solution?

This is where the maritime industry at large is quite vulnerable, particularly in the Bay Area. While there are several very good accredited maritime vocational schools on the East Coast – The Landing School or IYRS for example – there are none in California. If we’re to make sure that our clients (you) continue to receive professional quality workmanship, we need such a school…and now. While there’s been some talk of such a vocational school, it’s yet to take shape. If any of you have influence in such matters, I’d encourage you to become more deeply involved and make it happen. While KKMI’s capabilities are quite broad when it comes to servicing and repairing vessels, operating a vocational school is not our forte. We all need to be looking on the horizon….for this is our shared future