From the Bilge No. 8 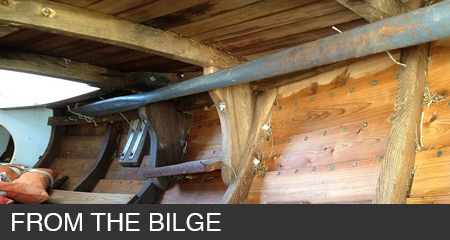 The other day as a boat was coming into the dock someone aboard said, “Toss me a line.” Of course, being an unfulfilled comedian I responded by saying, “A pirate walks into bar with a parrot on his shoulder…” And yes, my reply triggered the desired chuckle I was hoping for as I threw them the line. But this brings up the old nautical question, when does a rope become a line?

As with so many nautical things, there is no absolute authority on such matters. One might even accuse sailors of being the original authors of “alternative facts,” but I digress.

In this case, there is no steadfast answer – the basic theory is that as soon as you put a rope to work, it becomes a line. What is more than theory, it’s undeniable… eventually, these lines (aka ropes) will become chafed or degraded by the elements, the signs of which are visible, provided one does a top to bottom inspection. These are signs that the line is due for replacement.

There are other parts associated with your mast that will eventually need to be replaced. Even if a particular piece of gear looks fine on the outside. For example, rigging on a sailboat – it’s impossible to inspect what is going on internally – and what you can’t see, could turn into a serious problem.

Shrouds are usually made up of stainless steel wire cable or, in some cases, solid rod. Typically, the connections at the end of the wire cable are made up of swage fittings. These fittings are compressed around the wire to very specific tolerances; however due to a number of factors, over time a swage fitting can fail. Occasionally signs of failure can be seen when a fine, hairline crack develops in the “body” of the swage, but that’s not always the case. Other points of failure can occur, as noted below.

The same swaging technique is used on most lifelines and the cable is then connected to the pulpits or stanchions. This configuration provides an additional area of concern, beyond the lifespan of the swage fittings or the wire, as most lifelines have some slack, which creates a catenary (a sag between two points). The failure develops when the wire is deflected downward, such as when fenders are hung from the lifeline. The swage fitting is rigid but the wire is flexible and wants to bend, which can cause the wire to break at the swage. Below is example of such a failure.

There are many cases where the rigging, lifelines or fittings may look just fine externally, yet there may be corrosion going on within the wire or swage. This corrosion most often occurs as a function of the age in addition to the frequency and type of use. If you’re concerned about the state of your rigging, you should have one of our professionals take a look at your boat.

At KKMI your safety and enjoyment on the water is one of our highest priorities. We believe the more you know about your boat the better experience you will have. Please feel free to send me your thoughts on how KKMI can be your “go-to” source for all things aboard your boat.

Oh, and as for that pirate with the parrot… the bartender asked where he got him. The parrot responded, “The Tortugas.”