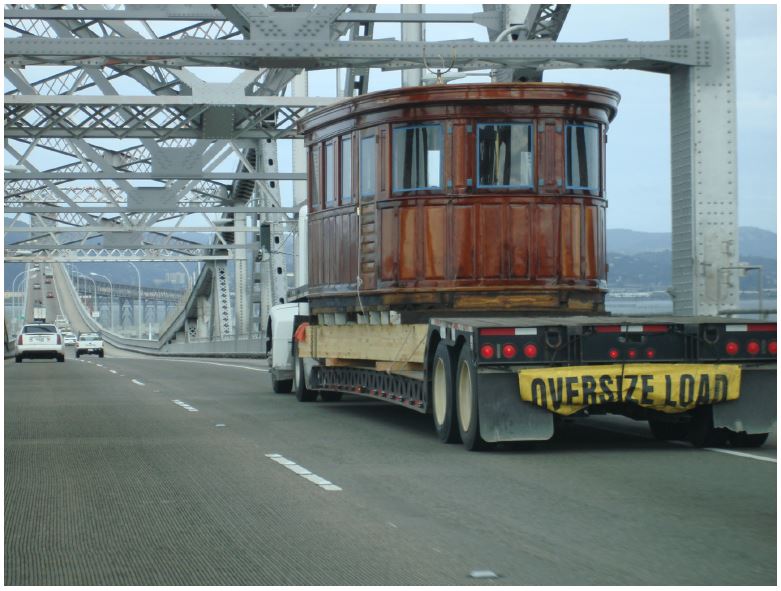 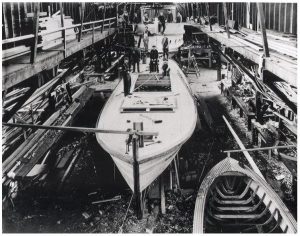 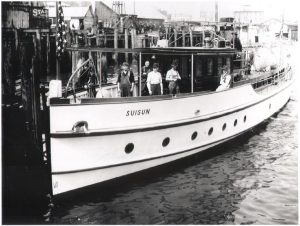 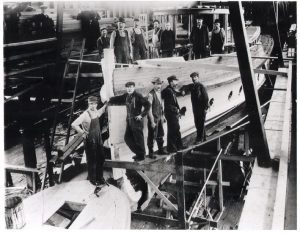 Arguably one of the first, if not THE FIRST large, motorized vessel to “sail” on San Francisco Bay, the SUISUN represents a time that’s long pasted but not forgotten. After two years of construction, the vessel USS SUISUN was launched in Astoria Oregon. From her logbook it notes sailing through the Golden Gate for the first time (23 years prior to the building of the bridge) on July, 10 1914 at 1030 hours was officially delivered to Col. Rees at Pier 23 in San Francisco. She has been on San Francisco Bay or the Delta ever since. 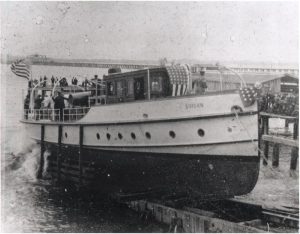 The vessel was commissioned by what is now known as the Army Corps of Engineers for the purposes of surveying the waters of San Francisco Bay and Delta region so that proper charts could be made for navigation. The vessel was also to be employed in assisting with rescue missions and locating and removing hazards to navigation.

The SUISUN had missions that were dutifully recorded in her logbook, such as the entry of August 10, 1914, which notes, “Located a large piece of old wharf floating with pile butts and wreckage.” However, not all her missions were strictly business as noted in the log of August 12, 1914 that states, “Left Pier 23 at 12:11 with Mrs. Rees and nine lady friends.” Or the entry of August 14, 1914; “Run up to Suisun Bay to above Pt. Edith and turned around and came back. Distance traveled today 85 miles (longest yet).” 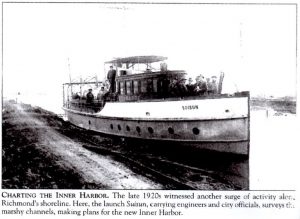 While the design of the vessel had a utilitarian purpose of a “workboat”, the Bay Area yachting community immediately took notice and welcomed the SUISUN due to her styling and exceptionally high level of finish. The December 1914 issue of PACIFIC MOTORBOAT they featured an article which provided details of her mechanical excellence and other extravagant appointments such as electric lights and hot & cold running water, creature comforts that many people did not even have in their homes at
that time let alone on a “workboat”.

The vessel featured amenities such as a saloon with varnished mahogany paneling, and a wheelhouse with optically clear curved glass windows that was also paneled with varnished 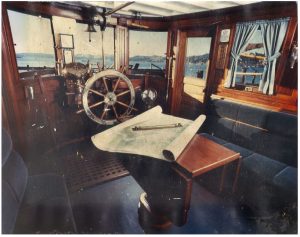 mahogany, which interior was surrounded by leather settees, plus a host of other custom-designed comforts. It is no wonder that once the word got out about this luxurious vessel there a minor scandal surrounding the elegance of this “work boat” with the taxpayers.

Comforts and all, this magnificently designed vessel surveyed and charted San Francisco Bay and its tributaries for 16 years (1914-1930). In 1930 SUISUN was decommissioned and sold to the Skaggs Family for $12,000. They changed her name to VIRGINIA S, and kept the vessel for 3 years.

In 1933 Tom Case purchased the vessel, which was a dream come true as Tom had at one time served aboard the vessel. Tom and his wife lived aboard the stately renamed to the original SUISUN for the next 45 years in Oakland, Stockton and at Lost Isle on the Delta.

The SUISUN was a familiar and welcome sight wherever she went, as Tom loved to bring visitors aboard his prized vessel. He estimated through the years, over 10,000 people had come aboard. He did cruises for various charitable organizations and she achieved celebrity status for a short period when John Wayne used her as his unofficial headquarters while he filmed the move “Blood Alley” in the Delta. The vessel reportedly also hosted a Russian astronaut as a guest.

By 1978, after some years of neglect, the vessel sank, two days after the death of Tom Case. The SUISUN was than purchased by the Mozzetti Family but soon discovered the task of restoring the vessel was greater than they thought and was then sold to Paul Stevenson in 1983. Paul undertook the challenge of restoring the vessel and after 25,000 man-hours and buckets of money; she once again became a classic maritime treasure on the Bay.

Sadly, in 1985 SUISUN caught fire and was found to be under insured leaving the only option but for the owner to sell the vessel for salvage. Subsequently, her hull was picked clean of anything of value and the rest was left to rot.

Shortly thereafter SUISUN’s brass hardware showed up at a garage sale in Marin when a Sausalito attorney happened to take notice of the brass trinkets and inquired as to their history. One thing led to another and the lawyer happened to learn the ship’s telegraph had also come from the wheelhouse of the SUISUN, which remained. While the hull of the SUISUN was not worth salvaging, her wheelhouse was spared from the fire and still intact, so arrangements were made to have the wheelhouse removed and brought to his home in Sausalito, where it remained until the Kaplan’s discovered and purchased the wheelhouse in December of 2007. 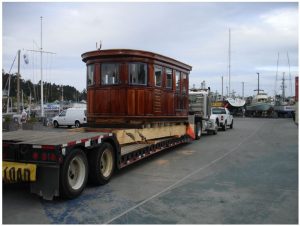 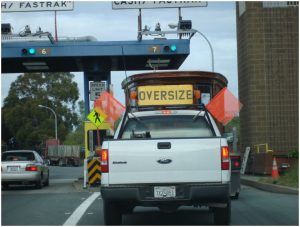 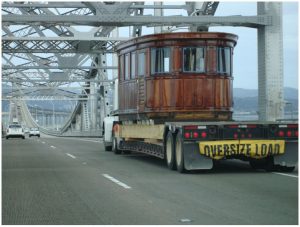 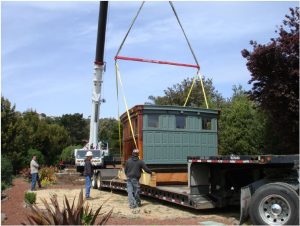 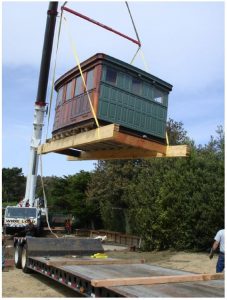 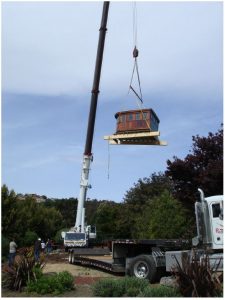 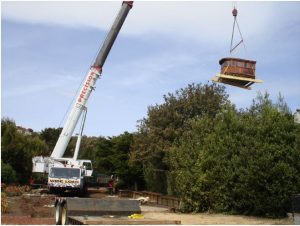 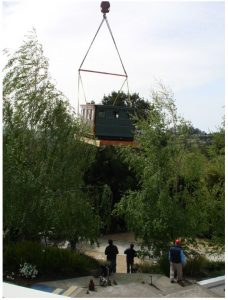 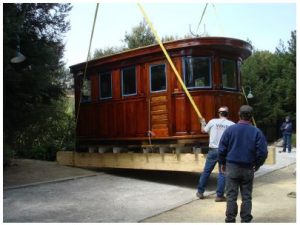 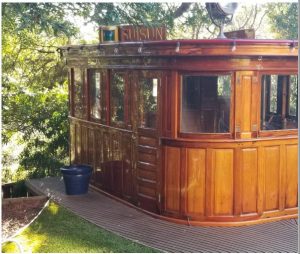 So, whatever happened to the SUISUN? Sadly, once again the SUISUN sunk on January 26, 2021. The owner, John Speary had lived aboard the vessel since 1994 in anchorages on the Delta and the Bay. That night while anchored off Sausalito, on Richardson’s Bay Speary put out distress call during a severe storm as the vessel began to take on water. With winds gusting to 60 knots and the bow of the SUISUN jumping
and dropping 10 feet, the Coast Guard was able to rescue Speary just as her floorboards went awash. With pumps unable to keep up with the flow of surging stormwater the SUISUN went to the bottom of the very Bay waters, at a depth of 7 feet in fact. The vessel was built to explore, log and document the underwater topography of the Bay, as well as identify submerged hazards to navigation and now the SUISUN had became such a hazard. A salvage company was hired to refloat the SUISUN for what would be the last time.

In a touch of irony, if not poetic nautical closure…the vessel was towed to the Army Corps of Engineers salvage dock. There the 107-year-old wooden vessel, built for the very agency that commissioned this celebrated craft would be crushed into pieces. What was an artifact of man’s ingenuity, built by hands of craftspeople of a trade that today there are few…was now just a pile of debris to be hauled away. Leaving with us a century of memories and thankfully her original wheelhouse, telegraph and all. 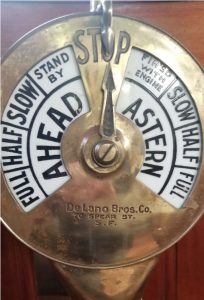