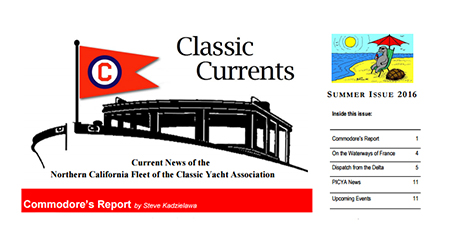 Alan Almquist, owner of North Star II, a 45′ classic 1928 Stephens and member of Northern California Fleet of Classic Yacht Association, wrote a nice article in Classic Currents, the NCFCYA newsletter. It was so nice in fact that we wanted to share it with you. Thanks to Alan for the kind words! 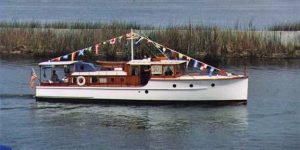 North Star II developed a leak around the strut blocks awhile ago and it was time to see about getting it fixed. But where to go? For many years I had hauled the boat in different places in the delta but since I was now in the Bay I thought it was time to try and find a new boat yard that was closer to home.

Two thoughts, actually three, came to mind. First, Svendsen’s because it was so close, but the facility was limited by the fact that their carryall could only manage two straps and North Star had never come out of the water that way with less than four. Svendsen’s it seems is also going through some administrative changes that made a decision to use them problematical. Maybe they will get their act together but at the moment their service response rates a D in my opinion, and I would be hard pressed to recommend them at this point.

A second possibility that I found was a wood specialist who worked out of the Berkeley Marina. I contacted him and he promised to get back to me but he never did and I was left assuming that he was just too busy to take on new work.

My third choice was KKMI in Richmond. My son, Chris had hauled his new sailboat out there in the Fall and I went over to help him with some work he was doing. I was impressed. The yard was competently managed and everyone I met was friendly and helpful. It was just that much further away for me, so I considered it last.

As it turned out KKMI worked out well because after the Petaluma cruise I went straight into the yard and the next Monday as they promised, I was hauled out with four straps, invited to stay on my boat while the work was being done and made myself at home for a little over two weeks while Joe Ribera tore into the aft area of the yacht finally replacing over five frames and five floor timbers – along with eight feet of the garboard planks on both sides of the keel. So much for a small leak around the strut blocks.

Wood burn from electrolysis was the culprit and it did a good job on the hull. Joe is a very fine wooden boat carpenter. His work was precise and when he had completed the repairs and the boat was back in the water there was no evidence of any leaks in the area he had worked on.  That is not to say that the boat did not leak until the hull swelled up, but just not leak where Joe did his handiwork.

Project Manager, Jock O’brien was on hand during the entire process and kept me informed as to how the bill was increasing as we went along and provided many helpful ideas on the best way to handle the repairs as we got into the project.

All in all I felt the overall cost was reasonable and the service terrific and I would certainly not hesitate to recommend this boat works to anyone looking for a place to haul out. At the end of the project they even give you a bottle of wine as a going away present.

KKMI is also a long standing advertiser in our newsletter and Paul Kaplan, one of the owners of KKMI, is a member of the Classic Yacht Association. — Alan Almquist Classic Currents Summer Issue 2016

You can read the full newsletter by downloading the .pdf here: