No matter what type of boat you own, if you keep it in saltwater, the bottom of your boat has likely been coated with antifouling paint, with the most common ingredient being copper oxide. In addition to copper, some antifouling paints contain other metals, such as zinc, or chemical compounds to deter marine growth. One such compound is Irgarol®, a product manufactured by the global chemical firm BASF. This algaecide is designed to inhibit slime from accumulating on the bottom of your vessel.

Irgarol can be found in popular paints, such as Pettit Trinidad Pro, Trinidad SR and Interlux Ultra. As one might expect, any product that deters marine growth has the potential to negatively impact marine organisms. Consequently, the European Union, through the International Maritime Organization, recently banned the use of Irgarol in antifouling paints. Because the EU was a significant buyer of Irgarol, this may be the reason that BASF decided to curtail the production of this compound. While paints containing Irgarol can still be lawfully applied in California, because this compound is no longer being produced, KKMI is limited to the product we have on hand.

What we hear from all the paint manufacturers is that they continue to invest in developing products that are more environmentally friendly. Truly, developing the ultimate antifouling solution has been the Holy Grail for marine antifouling paint companies for a very long time. In fact, if you’ll allow me to digress just a bit, in the decades-long battle for naval supremacy that was fought between Britain and France at the end of the 18th century, the British fleet had a secret weapon. It was, as secret weapons often are, hugely expensive. But it paid off, giving British ships more speed, maneuverability and staying power than their French rivals. That secret weapon was copper.

By covering the underwater parts of their ships’ hulls with copper plates, which slowly dissolved and released toxic copper ions, the British admirals stopped barnacles, mussels, and burrowing clams from taking up residence. Against fleets that were otherwise well-matched, the result was decisive. France lost. The British Empire became the global superpower of the 19th century. And as a result, much of the world speaks English, not French.

Back to the present day… paint companies in 2021 and beyond have a great challenge: to provide a product that will deter marine growth without harming the environment. California has always led the country in environmental protection, which of course leads to more restrictions. Thankfully, paint manufacturers are developing greener solutions to meet these environmental restrictions. At KKMI we are proud to be the only boatyard in Northern California that is working with our suppliers and actively testing newly developed antifouling paints. This testing includes periodically painting our own vessels with these new paints as well as having a test barge where individual paint samples from a broad spectrum of companies and formulations are being evaluated. This ongoing research will likely continue for years to come. 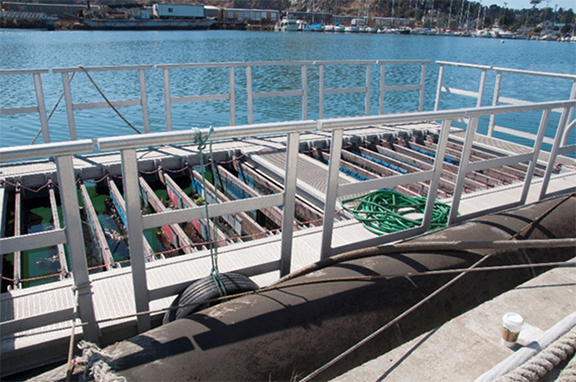 In the meantime, what should boat owners expect in terms of new antifouling paints? Well, unfortunately, we may find that bottom paints are not going to last as long. Harbors in Southern California are under pressure to reduce the levels of copper found in their marinas. The way to accomplish this reduction is by lowering the copper content in antifouling paints, which many paint companies have begun to do. This trend will likely continue…at an incremental pace. There is no reason for a boat owner to get overly concerned. The discovery rate on new breakthroughs is getting shorter and shorter. I believe that in the not-too-distant future we will be using bottom paints that will deter marine growth but have a negligible impact on the environment. It is just a matter of time.

See you on the waterfront!